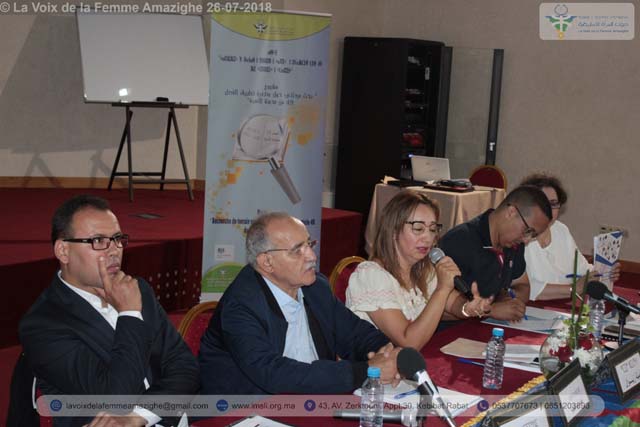 “Field research on the Status of implementation of article 49 in the Family code (Mudawana).

The Moroccan Family Code, or “Moudawana,” went into effect in 2004. Article 49 in this code made a provision in defining property ownership after marriage. Essentially, in the eyes of the law, two spouses have their own estate separate from the other before and during marriage unless they sign a document separate from the marriage contract that states that whatever property is made or bought during the marriage is owned by both of the spouses.

The issue at hand is that women who get divorced are not gaining ownership of any property because the additional contract is not being signed. These women have given their lives to building and maintaining their properties but if divorce occurs and the additional contract is not signed, they don’t end up legally owning any of the property because in the eyes of the law, the property is not shared between the two spouses.

From February 2-3, the Voice of the Amazighe Woman (VFA) team facilitated a training in Agadir. The purpose of the training session was to equip the twenty researches with the proper methodological skills necessary to collect data and understand the approach to field research. The workshop was sponsored by DAAM, a program in coordination with the British embassy. The President of the association, Amina Zioual, began by introducing the organization’s mission. Next, the project manager, Ismail Khejjou, introduced the project and provided a timeline for the field research. The workshop was led by sociology, Professor Taib El Ayadi.

The first day consisted of introducing the program to researchers and introducing the members to each other. Sociology professor,Taib El Ayadi facilitated a discussion about the family code and the objectives of the research. The motivation behind his presentation was to familiarize the researchers with the theme and allow them to be on the same page. Furthermore, El Ayadi explained how individual interviews and focus groups should be conducted in the field. He went into further details outlining the questions or guides that will be used. Each guide is to be used based on the person being interviewed.

For example, for focus groups, researchers need to read the guides ahead of time and be familiar with all of the questions so that by the time the focus group is organized, the person who is animating the focus group knows exactly how to lead the group and go from one question to the next. El Ayadi explained this concept in details outlining the specific steps that need to be taken by the researchers. Next, he explained the guidelines for individual interviews with lawyers and the “Adouls”. Researchers are also informed that focus groups may contain married women, divorced women, married men, or divorced men.

The second day of training consisted of a practical test. The researchers had to apply what they learned about interviewing in a practical setting. The researchers practiced to be prepared for both the focus group and the individual interviews. After the practice activity there was time to answer any lingering questions the researchers might have had. The researchers that came across problems asked questions regarding how to proceed once an issue with the participants had arisen.

Current State of the Research

Most of the researchers have finished conducting their focus groups and some have finished conducting individual interviews as well. Currently, they are in the process of having two researchers finish conducting their focus groups and individual interviews. It is important to note that there have been some challenges during this research. Specifically, it has been challenging to get divorced men to attend focus group sessions and therefore conduct focus groups with divorced men. Culturally speaking, the area where the research is being conducted is very conservative and people generally lead very private lives.

The next step of this research project includes conducting individual interviews with lawyers and “Adouls”. Once that is done, the final step is to conduct individual interviews with judges, specifically, two female judges and two male judges. This may be difficult to achieve because it is difficult to gain access to judges and record them. If this cannot be achieved, the alternative would be to analyze two previous court cases, one that is for the woman and one that is against her. Finally Professor El Ayadi will go through the process of data analysis.

Special thanks to the journalists from the following journalistic institutions who came to the workshop as well to learn about the project and help us raise awareness about this issue.

Linkes to some articles.

In the framework of DAAM project the Voice of the Amazighe association’s “Project Follow-Up Committee has had several meetings in regards to capacity building and reinforcement programs.

The association established a committee to evaluate the progress and implementation of the project. Part of their responsibility is to maintain coordination with the research consultant as well as the field researchers.

The meetings on the capacity building program were led by two consultants from the DAAM program. The purpose was to carry out an organizational diagnosis for our association in order to determine our strengths and where we can improve.

At the outset, the two consultants met members of the association for one whole day. During this meeting, questions and issues were raised relating to the administrative and financial management of the association. Consultants also met some of our previous project partnersto learn more about our project management practices. Moreover, our project team had the opportunity to meet the consultants to share what they know about about the association in terms of administrative, financial, and project management. DAAM representatives also met with people who participated in our previous project activities.

A couple of weeks later, a meeting was held at the association office to present the preliminary findings of the diagnosis that the consultant had conducted.  The most important aspects discussed were those related to how the association can improve.

Recently, Mrs. Ellen van de Bovenkamp, a representative of the DAAM team, visited the association to follow-up on the project status. The project manager talked to Mrs. Ellen about what has been done so far and answered questions related to the subject.