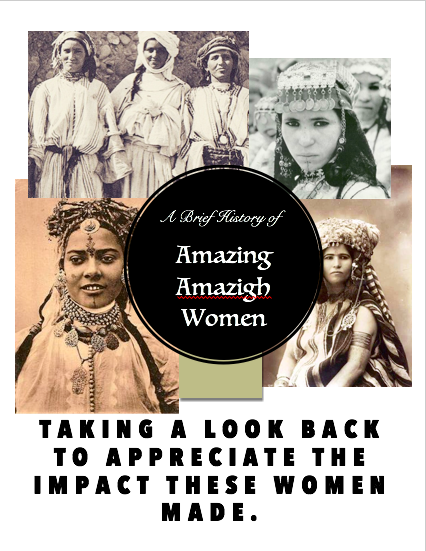 In the past, Amazigh women were once honoredand revered for their strength and leadership. Queens and goddesses among the Amazigh were significant players in politics and society, and these strong figures were necessary for the evolution and survival of the Amazigh people and culture. Although there are more likely to be many more queens and goddesses who have been lost tohistoricalrecord, some of these queens are still known today.

Tanit was a goddess worshipped by the Amazigh people in the first Berber religion, along with her husband and dual male deity, Ba’al. Tanit is said to have been a Punic and Phoenician deity worshipped across North Africa by the Berber people and in Carthage. Dea Caelestis. The Amazigh has a long history ofHonoring women.

Tin Hinan, historians do not know about Tuareg tribes, possibly in the Hoggar region of modern-day Algeria. She is known asTamenukalt,or the « Mother of All » or « she of the tribes ». In the year 1925 her tomb was opened by Byron Khun of Prorok and the French Army, and in 1933 archaeologists discovered the skeleton of a woman most likely buried in the fourth century, laying on a wooden litter facing east, accompanied by heavy gold, silver , and pearljewelry. thisjewelryThis is a book which is a corroborated by Tuareg legends about the tomb and the woman buried there. Many Arabic sources have been aware of the fact that, as Ibn Khaldun, prominent North African historian, whose story of the woman is most likely to be the most important of the Hoggar named Tiska, most likely related to Tin Hinan.

After the death of her husband, Queen Zenobia took power of the city-state of Palmyra – an essential checkpoint for traders on the Old Silk Road in the last 200 years. three fold. Her rule ended when the Romans finally captured her and made her walk in golden chains in Aurelian’s Triumphal parade. More strong and capable women came next. Zabibi and then immediately after, Samsi were warrior queens in the eighth century and led great armies ofPrimarily women.